Today I finally made a try server build which includes patches to some bugs, each of which fixing a problem that the ACID3 test is checking for.  The build gives us 97/100 points on the ACID3 test, which is impressive.  Here is the list of the fixes that this build includes:

You can download this build from here for all the three platforms.  Here's a screenshot of the ACID3 test with a copy of this build under Windows: 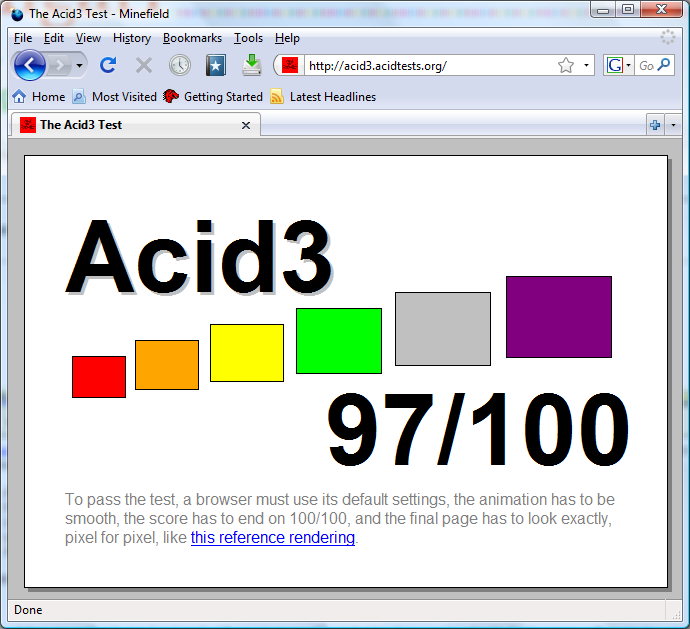 The following is a report of the tests which are failing in this build:

The ACID3 tracking bug has details on the failing tests, and is also tracking the bugs filed in Bugzilla for fixing the remaining tests.

Oh, and another cool thing about this build (in case it's not obvious already) is it includes SMIL support!  SMIL is a W3C recommendation for creating declarative animations, which is integrated into SVG.  When you check out this build, make sure to check out some SMIL tests available here.

Oh, and just to mention the obvious, neither of these patches are written by me; I just applied them on my mozilla-central hg clone, and pushed to the try server, with a simple patch I copied from Daniel Holbert's patch to enable SMIL to build by default (because it doesn't seem to be possible to pass a customized .mozconfig file to the try server to use in its builds, and SMIL support by default is turned off, unless –enable-smil is used in .mozconfig).