Bugzilla Tweaks getting some attention again!

I have good news for you!  A while ago, Shawn convinced me to move the source code to the Bugzilla Tweaks add-on to bitbucket.  I did that, and lo and behold!  We now have two contributors to the add-on!  Steve Fink, and Heather Arthur, are the two wonderful people who sent me emails out of the blue and told me that they want to improve the add-on!  And they were not kidding!  Thanks to their efforts, I now have something which I'm happy to call Bugzilla Tweaks 1.7.

Heather hacked the add-on to make it compatible with the new Add-on SDK.  Steve taught it how to work on landfill as well as bmo, and made it redirect you to the bug's page after changing a bug (to make it session-restore friendly).  And then, as if all of that wasn't enough for a release, he decided to amaze me by making it easier to file bugs in the same product or component as the bug you're viewing.

All this caused me to feel ashamed of myself for not having any cool ideas on what to do, so I decided to do the obvious (remove the “Assign to me” button which is now obsolete by the “take” link next to the assignee field.  And then I remembered that a while ago, Dan Veditz had suggested that I should copy Jesse‘s “bug attachment source” greasemonkey script.  So I thought that would be a cool feature to add myself so that I can continue to pretend to be cool.  So I did.

Then, I packed all of this awesomeness, put it in an XPI file, and submitted it to AMO.  Bugzilla Tweaks 1.7, the mundanely named new release, will be available for your enjoyment as soon as the AMO gods deem it appropriate for you.  If you have the previous version, 1.6, installed, then you should sit there and do nothing, and Firefox will magically upgrade you to the new version (yes, without restarting!) at a time of its convenience.  If you don't have it installed, and you use bugzilla more than a few minutes per month, then you need to be kinder to yourself, and install this add-on.  If you really want to live on the edge, then you should go ahead and install it by pressing the scary yellow button on this page.

Now let me share a vision of the future (and my pathetic Gimp skills) with you. 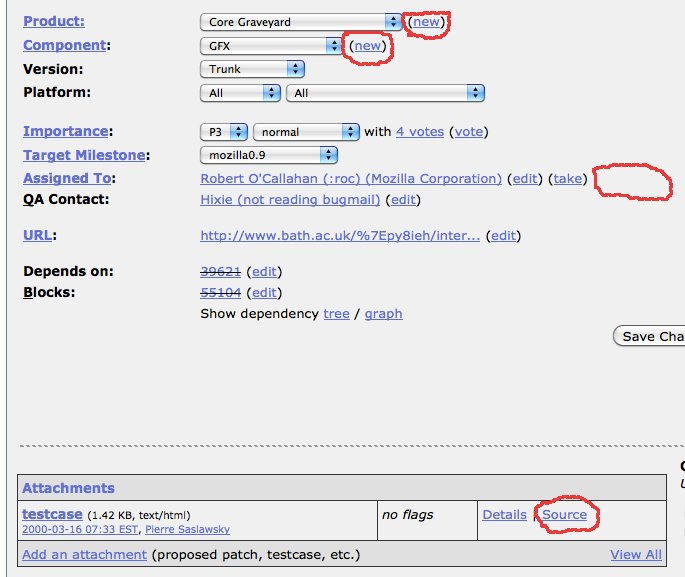 Update: I disabled the redirection and switched to using history.replaceState as suggested in the comments.  I've pushed another update to the add-on, version 1.8, which implements this.