Next week, Nightly will switch to the 57 branch, beginning the development cycle of what will be the last train leaving the station towards Firefox 57.  Around 5 months ago, I started writing the first one of these newsletters, which of course was well past when the Quantum Flow project got started.  It's probably a good time for a retrospective on the way that we have come so far.

During this time, many small and medium size performance projects were started.  Some are finished (and shipping even!) and some still ongoing, but the rate of progress has been quite astonishing.  I have tried to talk about as many of these as possible in some detail in the newsletter, and these are only one part of the overall performance work happening.  Here is a list of some of these projects with some overall status report: 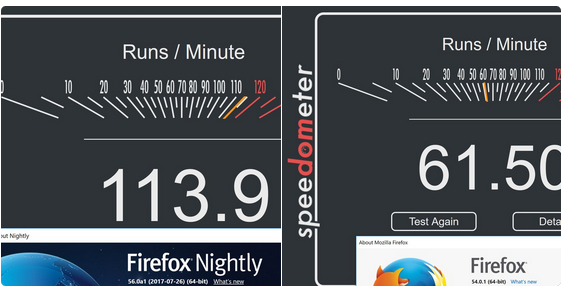 In other performance related news this week, Stylo, our new parallel CSS engine written in Rust, is ready for testing on the Nightly channel.  I've been playing with it on my main browser profile for a while and so far I've been really liking what I'm seeing.  I have gone to some pages where restyling cost typically shows up in profiles, and have added “StyleThread” to the list of threads in the Gecko Profiler settings, and have watched the parallel restyles happening in profiles, it's quite interesting.  Especially when you see magic such as the Rust rayon threads calling into C++ code without any kind of synchronization on a background thread and the safety of this is ensured through static analysis.  We are indeed living in the future!  It is so exciting that we're probably going to be the first browser engine deploying a parallel CSS engine through the superpowers of Rust, deploying this technology into the hands of millions of people.

And now again it's time for the most important part of these newsletters, taking a moment to say thanks to those who helped make Firefox faster last week.  Apologies to those of you who I'm forgetting to name here.