As usual, I have some quick updates to share about what we've been up to on improving the performance of the browser in the past week or so.  Let's first look at our progress on the Speedometer benchmark.  Our performance goal for Firefox 57 was to get within 20% of Chrome's benchmark score on our Acer reference hardware on Win64.  Those of you who watch the Firefox Health Dashboards every once in a while may have noticed that now we are well within that target:

It's nice to see the smiley face on this chart, finally!  You can see the more detailed downward slope on the AWFY graph that shows the progress in the past couple of weeks or so (dark red dots are PGO builds, orange dots are non-PGO builds, and of course green in Chrome): 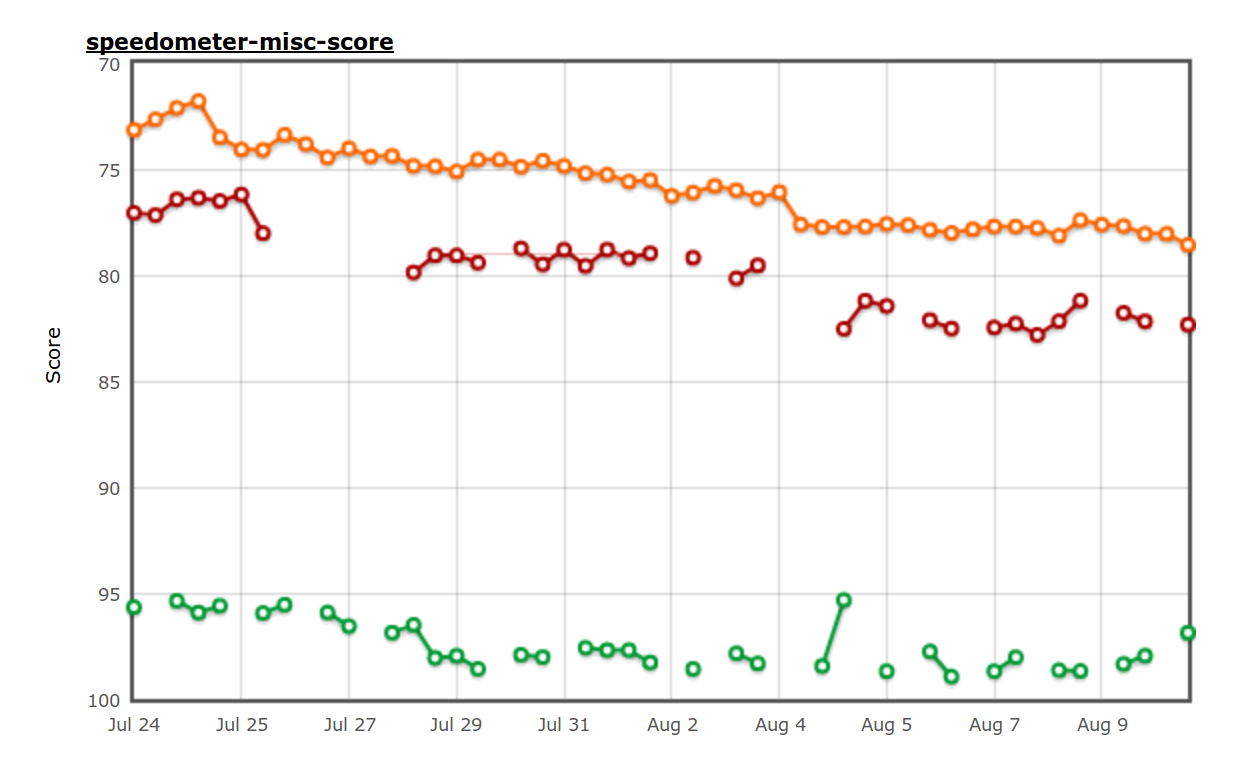 The situation on Win32 is a bit worse, due to Chrome's recent switch to use clang-cl on Windows instead of MSVC which gave them an around 30% speed boost on the 32-bit Speedometer score, but we have made progress nonetheless.  Such is the nature of tracking moving targets! 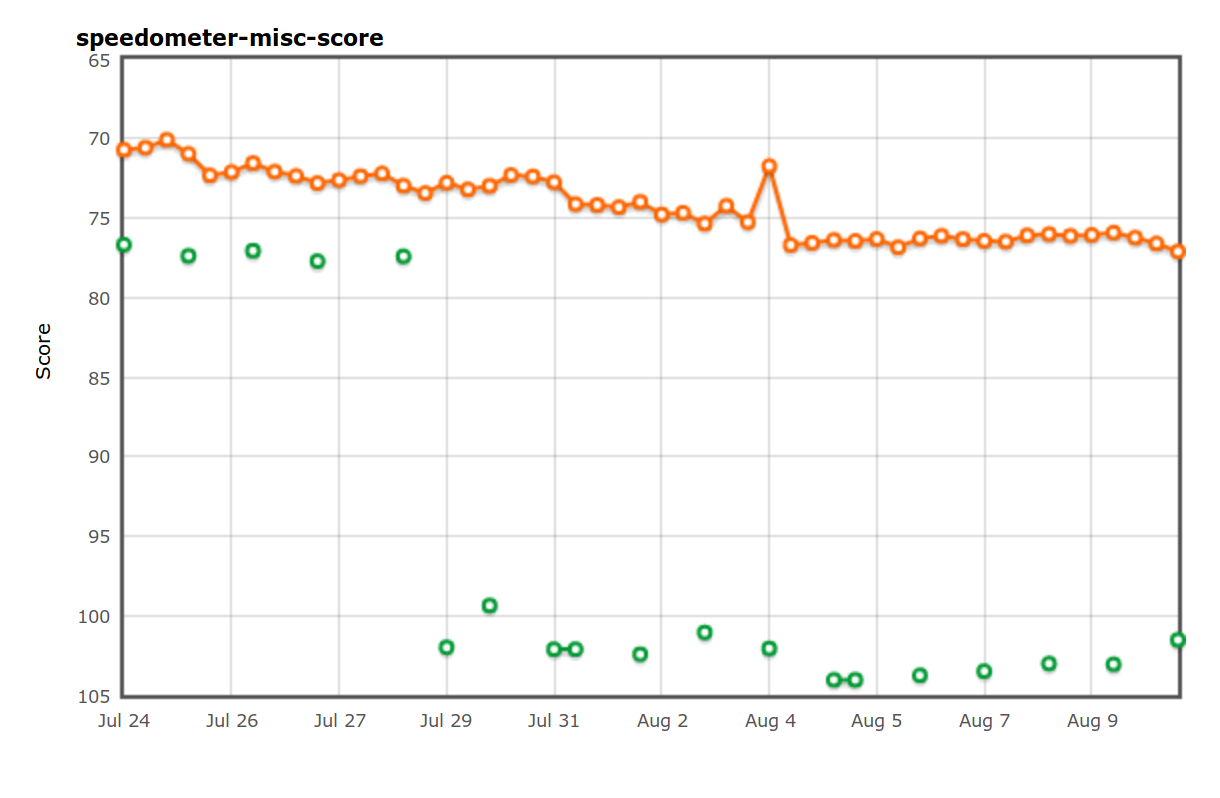 The other performance aspect to have a look at again is our progress at eliminating slow synchronous IPC calls.  I last wrote about this about three weeks ago, and since then at least one major change happened: the infamous document.cookie synchronous IPC call was eliminated, so I figured it may be a good time to look at the data again. 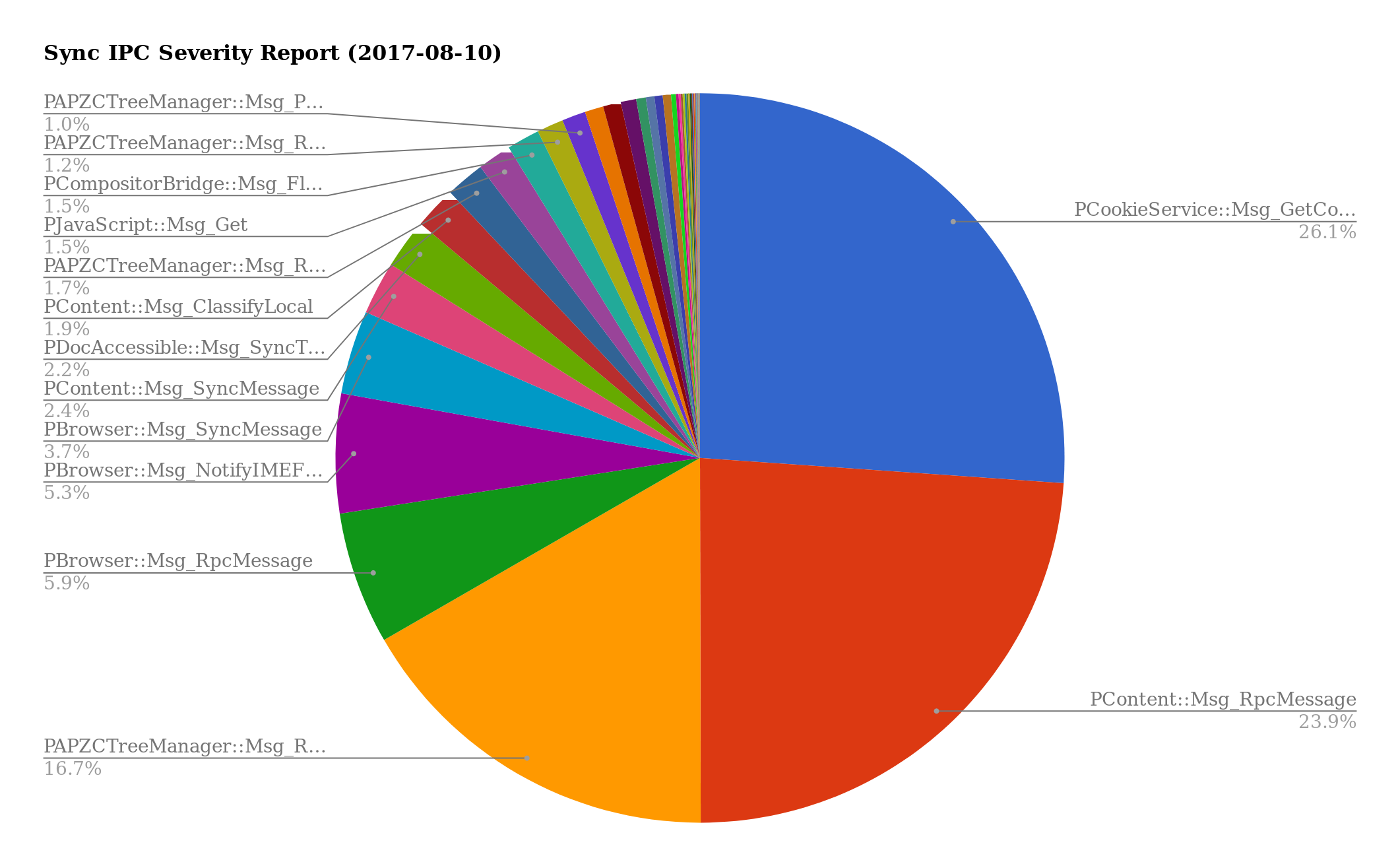 Telemetry data is laggy since it includes data from older versions of Nightly, but if you compare this to the previous chart, there should be a stark difference visible: PCookieService::Msg_GetCookieString is now a much smaller part of the overall data (at around 26.1%).  Looking at the list of the top ten messages, the next ones in order are the usual suspects for those who have followed these newsletters for a while: some JS initiated IPC, PAPZCTreeManager::Msg_ReceiveMouseInputEvent, followed by more JS IPC, followed by PBrowser::Msg_NotifyIMEFocus, followed by even more JS IPC, followed by 2 new messages that are now surfacing as we've fixed the worst ones of these: PDocAccessible::Msg_SyncTextChangeEvent which is related to accessibility and the data shows it affects a relatively small number of sessions due to its low submission rate, and PContent::Msg_ClassifyLocal, which probably comes from turning the Flash plugin click-to-play by default.

Now let's look at the breakdown of synchronous IPC messages initiated from JS:

The story here remains unchanged: most of the sync IPC messages we're seeing come from legacy extensions, and there is also the contextmenu sync IPC, which has a patch pending review.  However, the picture here may start changing quite soon.  You may have seen the recent announcement about legacy extensions being disabled on Nightly starting from tomorrow, so hopefully this data (and the C++ sync IPC data) will soon start to shift to reflect more of the performance characteristics that our users on the release channel will experience for Firefox 57.

Now please let me to acknowledge the great work of those who made Firefox faster last week.  I hope I'm not forgetting any names!