As was announced earlier today, Firefox 57 will be merged to the Beta channel on September 21, which is two weeks from today.  That wraps up the long development cycle that has gone on for maybe about a year now.  We had a lot of ambitious plans when we started this effort, and a significant part of what we set out to deliver is either already shipped or landed on Nightly.  It is now a good time to focus on making sure that what we have which isn't shipped yet is as high quality possible, by ensuring the crash rates are low, regressions are triaged and fixed in time, and remaining rough edges are smoothed out before the release.  There are still a lot of ongoing projects in flight, and of course many of open Quantum Flow bugs that have already been triaged which aren't fixed yet.  I'll write more about what we plan to do about those later.

Let's now have a quick look at where we are on the battle on the synchronous IPC performance bottlenecks.  The TL;DR is: things are looking great, and we have solved most of this issue by now!  This worked has happened in 50+ bugs over the course of the past 8 months.  The current telemetry data shows a very different picture on the synchronous IPC messages between our processes compared to how things looked back when we started.  These graphs show where things are now on the C++ side and on the JS side.  For comparison, you can see the latest graphs I posted about four weeks ago. 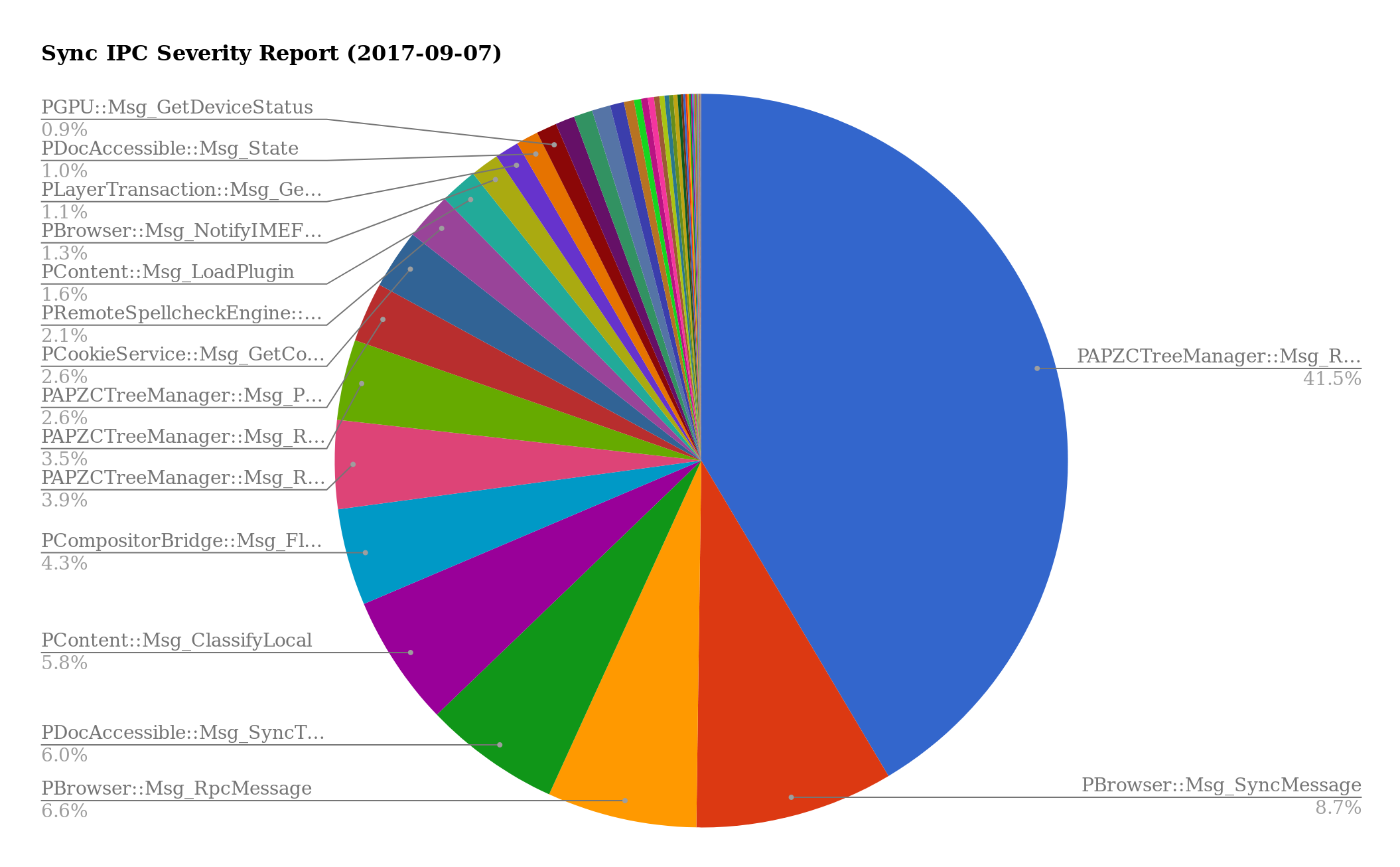 On the JavaScript side, the messages in the top ten list that are coming from Firefox are contextmenu, Findbar:Keypress, RemoteLogins:findRecipes (which was recently almost completely fixed), Addons:Event:Run (which is a shim for legacy extensions which we will remove later but has no impact on our release population as of Firefox 57) and WebRequest:ShouldLoad (which was recently fixed).

As you'll note, there is still the long tail of these messages to go through and keep on top of, and we need to keep watching our telemetry data to make sure that we catch other existing synchronous IPC messages if they turn into performance problems.  But I think at this point we can safely call the large umbrella effort under Quantum Flow to address this aspect of the performance problems we've had in Firefox done!  This couldn't have been done in such a short amount of time without the help of so many people in digging through each one of these bugs, analyzing them, figuring out how to rework the code to avoid the need for the synchronous messaging between our processes, helping with reviews, etc.  I'd like to thank everyone who helped us get to this point.

In other exciting performance news, Stylo is now our default CSS engine and is riding the trains.  It's hard to capture the impact of this project in terms of Talos improvements only, but we had some nonetheless!  Hopefully all the remaining issues will be addressed in time, to make Stylo part of the Firefox 57 release.  A big congrats to the Stylo team for hitting this milestone.

With this, I'd like to take a moment to thank the hard work of everyone who helped make Firefox faster during the past week.  I hope I'm not forgetting any names.