I hope you're not tired of reading these newsletters so far.  If not, I applaud your patience with me in the past few months.  But next week, as Firefox 57 will merge to the Beta channel, I'm planning to write the last one of this series.

Nightly has been pretty solid on performance.  It is prudent at this point to focus our attention more on other aspects of quality for the 57 release, to make sure that things like the crash rate and regressions are under control.  The triage process that we set up in March to enable everyone to take part in finding and nominating performance problems which they think should be fixed in Firefox 57 was started with the goal of creating a large pool of prioritized bugs that we believed would vastly impact the real world performance of Firefox for the majority of our users.  I think this process worked quite well overall, but it has mostly served its purpose, and participating in the triage takes a lot of time (we sometimes had two meetings per week to be able to deal with the incoming volume of bugs!)  With one week left, it seemed like a good decision to stop the triage meetings now.  We also had a weekly 30-minute standup meeting where people talked about what they had done on Quantum Flow during the past week (and you read about many of those in the newsletters!), and for similar reasons that meeting also will be wound down.  This gives back several person-hours back on their calendars to people who really need it, hurray!

The work on the Speedometer benchmark for 57 is more or less wrapped up at this point.  One noteworthy change that happened last week which I should mention here is this jump in the numbers which happened on September 7.  The reason behind it was a change on the benchmark side to switch from reporting the score using arithmetic mean to using geometric mean.  This is a good change in my opinion because it means that the impact of a few of the JS frameworks being tested wouldn't dominate the overall score.  The unfortunate news is that as a result of this change, Firefox took a bigger hit in numbers than Chrome did, but I'm still very proud of all the great work that happened when optimizing for this benchmark, and I think the right response to this change is for us to optimize more to get the few percentages of head-to-head comparison that we lost back.  :-) 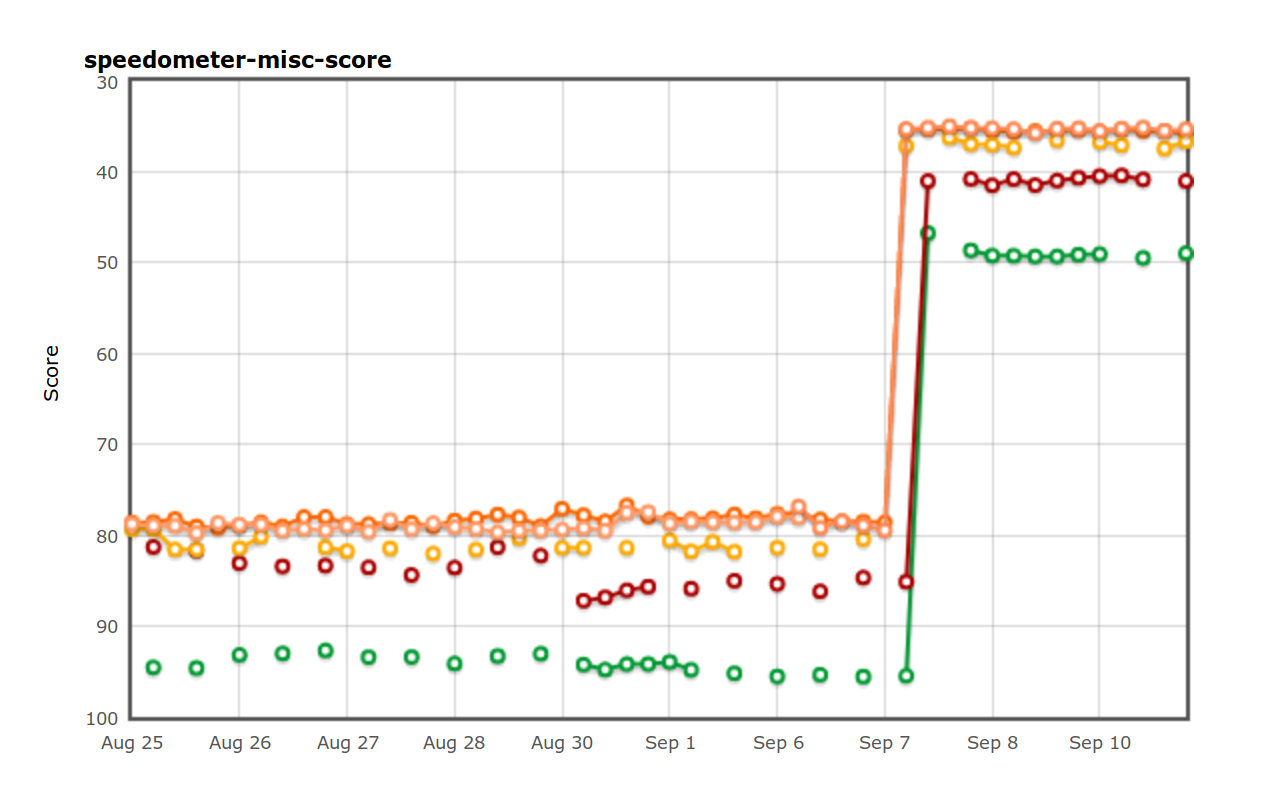 Even though most of the planned performance work for Firefox 57 is done, it doesn't mean that people are done pouring in their great fixes as things are making it to the finish line last-minute!  So now please allow me to take a moment to thank everyone who helped make Firefox faster in the last week, as usual, I hope I'm not forgetting any names here: